A 4-star hotel where you feel at home

The history of the Park Hotel Argento is a story of patience.

Rina and Guido De Filippi, a family of builders from Levante, have been trying unsuccessfully for more than fifty years to build on the land on which the hotel is located. The land was abandoned for some time, although it was home to a magnificent pine forest, of which one can still admire some impressive examples. On the steep hills, the women of the village went in search of pine nuts and aromatic herbs to cook the traditional "Levanta Gattafin".

The turning point came at the end of the last millennium, when the municipality and the region issued licences for the construction of two four-star hotels as part of a project to increase the supply of high-quality tourism in Levanto.

The aim of the project was to create a structure which re-establishes the characteristics of a Ligurian village and inserts the building into the landscape context without defacing it.
A few years after its construction, another crucial point in the history of the Park Hotel Argento was reached.

Brothers Virginio and Massimo came from the construction industry, far from tourism, and were looking for someone willing to step up. Two people turned up through a mutual friend. For some time, they had managed accommodation throughout Italy and after years of difficulties with a huge structure in Tuscany, they wanted a different, secluded environment in which they could personally take care of the customer.

With a surprising ease and speed, the company structure of the Park Hotel Argento was born

The night before, Beppe and Hervé could not sleep.

“It wasn't so much the new adventure that made you think.” HERVÉ REMEMBERS, “Rather, it was the automatism of the structure. Everything was based on one point of control, it was very different from the other hotels where we worked. ”

On the first night, only a few rooms were occupied, mainly by old customers who visited them.

“We were a tranquil location; the place was a fairy tale. It was remote, but central, like the tracks of the electric train for the children. You could hear the cicadas and at the same time the train whistling” TELLS BEPPE

There are many memories of these ten years. Memories that encompass everything - strong emotions and funny moments, indescribable episodes, great satisfaction and difficulties. As in 2011, when the hotel was buried under a tsunami of mud.
It was October 25, the day of the flood, the day on which nature determined the law.

The hotel was full, the inauguration of a Honda motorcycle took place at that time.
The management was there with all the models to be exhibited, as was the foreign press invited to the event. That afternoon, an unstoppable flow of mud flowing out of the mountain covered the entire ground floor, the restaurant and the pool in no time. The damage was enormous, it amounted to hundreds of thousands of euros.

“The best thing was to suddenly see the engineer who designed the motorcycle, when he swung a broom and helped us get rid of the mess. Within five hours we had cleaned up the restaurant and were ready to serve dinner to the guests who had somehow managed to return to the hotel.” 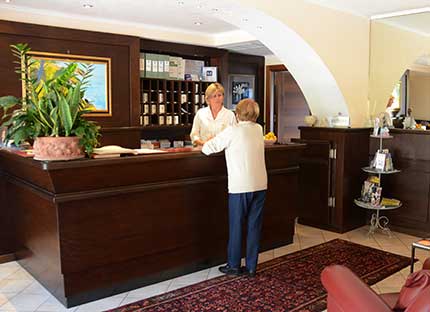 Caring for people is sincere and comes from the heart. Especially when it comes to a four-star hotel, everyone has to feel at home, welcomed by this great family, made up of all the staff. It is no coincidence that many customers are sure to find familiarity in a place they love, return to the same room every year and have dinner at the same table.

“Is the enthusiasm still the same after ten years??”
Definitely.”
AND THEN, WITHOUT THINKING TWICE ABOUT IT: “It's even bigger.”THEY ANSWER UNANIMOUSLY.

The Park Hotel Argento is ready to look ahead!

During the season, he always sits at the wheel of the shuttle to accompany the hotel guests to Levanto. He never makes a jerky move on the accelerator pedal, and even at the end of the summer, he does not reveal a moment of impatience. Beppe greets everyone peacefully and with a smile, like a family member, to take you to the airport when you take a flight to or from your vacation.

With a quick wit and a sense of humour, he manages to translate into several languages. In his spare time he follows his passions, such as the piano he has played since childhood.

Born and raised in Milan, he can cheer no one less than Inter.

Hervé was born in Orléans. After his studies and his first professional experience in Paris, he was ready to leave the metropolis to experience something different. The first station was Trieste, the border crossing where it was possible to reinvent yourself in the 1980s.

He is always behind the reception, has a radiant look and a smile that are immediately ready to shine. When he's there, you feel like nothing can go wrong. Apart from the wine and cheese, that he can also find here, he lacks nothing from France and he has chosen Italy as his homeland without looking back.

Both art lovers are happy to exhibit works by local artists every year in the hotel's rooms and corridors, and it is even better when they are young artists, here they are given the space and the opportunity to be noticed.

Before they first met, they had said to each other, “If they hold you back a little bit, it means it didn't go well.” The meeting lasted three hours...

They were immediately on the same wavelength, even on the most difficult questions. Although they come from the Antipodes, they share the same working philosophy.

This combination is proof that they can go far where mutual esteem and respect prevail, even when they come from distant places.

Why choose Park Hotel for your Holiday?

Are you leaving for the holidays with your 4-legged friend? Here at the Park Hotel Argento he is Welcome!

Outdoor swimming pool with hydromassage area and panoramic view of Levanto and its coast.

The restaurant offers excellent local and national cuisine and rich buffet dinners. The well-stocked bar is ideal for relaxing breaks.

We have an indoor covered parking, on request for a fee, and an outdoor parking not guarded.

Stay connected with your business or share your Levanto experience on social media. Tag #parkhotelargento